We are very thankful to stay in close contact with publishers and writers who discuss our projects and help us to raise awareness.

August – We have just signed a Memorandum of Understanding with Wildlife Conservation Society of India to work together on conservation projects. Details on the Collaborators page.

Quoted in an article by the Times of India “What’s plaguing Goa’s Oceans today: Overfishing, Underwater Garbage and Irresponsible Tourism” on 8th June 2018, “‘Global warming, excess silting, underwater garbage and pollution are the primary areas of concern when it comes to Goa’s marine life right now’ but the most ‘immediate problem is of underwater garbage’. He says ‘We are currently working with the GWMC and the local tourism industry stakeholders to tackle this problem at source. Some of the long-term solutions are strong education campaigns for the general public about personal waste reduction, which includes management, segregation and collection at source, besides recycling and proper disposal of the rest. other than that we need to find new uses for disposed materials, reduce or eliminate single use plastics, and impose fines and stiff penalties on polluting industries and public.

“Tarballs, if they are not breaking down, can smother marine life and even corals. luckily for us, tar balls washing up on the coast is seen in Goa during late May and early June, which is off-season for us (scuba divers). We close in April. But if the tar balls are seen more often, it could affect us. Many are blaming ships for it, but I do not know. We have been seeing this occurrence since the 1970s. I think it’s important to first ascertain 100% the source of this problem which has been plaguing Goa waters and beaches for years before allocating responsibility/accountability for stopping the same. Given that it’s taking so long, it’s imperative that a special task force should be formed on a war-footing to find the source. Simultaneously, several practical solutions should be examined so that action can be immediately taken once the problem has been identified.” 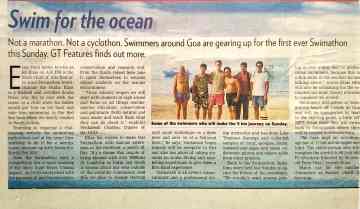